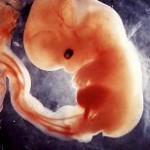 Around week 7, the embryo becomes a fetus. At this stage, tissues and organs formed in the embryonic stage mature.

The embryo’s tail begins to fall. The heart beats and the skeleton acquires its form. The baby will grow more than twice this week: it will be about 1 centimetre. The placenta is still being formed and begins to transfer nutrients from your body to the baby and withdraws the waste products. The umbilical cord, the lifeline between the mother and the baby, begins to grow and widen.

Neurogenesis is an extremely rapid process of cell division that produces neurons. The baby’s brain will have one billion neurons. Most of the information treatment “circuits” are formed during the first four months of pregnancy. It might not look like it but, unlike other parts of the human body, the brain does not generate new cells (although there is new research about the birth of some types of neuron). Even so, although they will hardly be renewed, neurons have a very long life (about 100 years).