Can I practice sex during pregnancy?

Sex in pregnancy is more common than it seems. People think that the sexual desire of women at this stage falls and, this is partially right. During the first weeks of gestation, around 54% of the women see their sexual desire disappears due to nauseas and other symptoms. But taboos and other fears are added to this, which make us think that sex during this stage is detrimental. In fact, this desire depends on the trimester, but also on each mother. In addition, neither the mother nor the baby are at risk. In fact, it can be beneficial for both of them. Except in the case of a risk pregnancy or when the doctor contraindicates vaginal relations, you must enjoy sex.

In the first trimester, some women do not want to make love due to the habitual malaises at this stage. However, others have more sexual desires, especially due to the changes in genital sensitivity that bring about the hormonal changes.

In the fourth month of gestation, as from week 14, the body has already become accustomed and, loaded with hormones, it multiplies the libido of women. Since then, and until the sixth or seventh month, women can have as much sexual activity they want. Some of them can even be excited faster and easier. The swelling of the lesser and greater lips increases, and so do the lubricates of the vagina too. Thus, the sexual act can get to be more pleasant, sometimes women can even reach multiple orgasm.

From the sixth month onwards, at week 24, some couples practice less sex because of uncomfortableness or by concern. But most of them continue with their normal sexual life. In the last months, orgasm is more beneficial than ever for the mother and her future child. 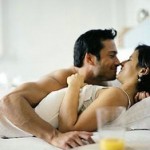 A good sexuality during pregnancy prepares the body for a vaginal childbirth. During a sexual relation the muscles in the vagina are exercised and improve their muscular tone for the time of birth. In addition, thanks to the exercise, the baby receives more oxygen, which helps the baby to be healthier.

Your baby will not notice anything, except for your faster palpitation and your accelerated breathing. Unless your pregnancy is complicated, you do not have to worry about the baby. The ovular membranes and the amniotic fluid protect the baby and, moreover, the neck of the uterus is closed with protective fluids until your waters brake.

If your pregnancy is considered to be of high risk or some special situations arise that could complicate your situation, the doctor will suggest you do not have sexual relations. It is advisable to leave these relations in the following cases: